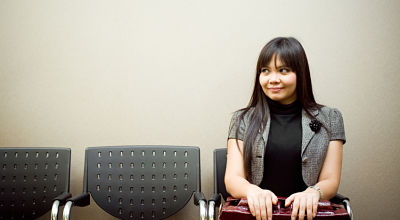 It was my third flight of the day. I was on my way to interview at a top 30 station, which was no small feat, given that I was currently a weekend anchor/ reporter in Abilene, Texas—market #153.

The flight was one of the bumpiest I have ever experienced. As soon as I hit the terminal, I ran to a garbage can and puked my guts up. It was an omen of things to come.

Thankfully, the news director was late, so he didn’t witness my very public vomiting. He took me to dinner and proceeded to grill me for the next hour and a half. I don’t remember much of the conversation because my head was pounding. I do recall describing a gut check moment about the importance of being objective when I was a producer at CNN. I knew he didn’t like my answer. Possibly because I was too honest or earnest? Who knows?

Day two opened with him grilling me about the 10 stories and two newscasts that I had sent him. He wanted to know who was helping me write my packages?

My eyes talk. And I am fairly certain they got me into trouble on this particular day as I said, “Whom do you imagine in market 153 is writing packages for me—a former CNN producer?”

The subtext of all of this was that I was way too attractive to be this smart, thus someone must be helping me.

After that, I threw caution to the wind. No matter how badly I wanted out of Abilene, Texas—I vowed never to work for this jerk. So as he dropped me off at the airport that evening I asked, “So when will you make a decision?”

“Well, I have two more people to interview.”

“But what are my chances?” I pressed.

“Well, this is ummm very forward of you,” he said.

“Good reporters are forward. And they aren’t afraid to ask tough questions.”

“Well, ummm we’ll let you know,” he said as I closed the door on him and that job.

Lesson: Sometimes jobs simply aren’t a good fit. And no matter how badly you want to move up—you should keep looking until you find someplace that values your skills.

Having said that, it is the news business. And if you wait to find a nirvana newsroom—you’ll be waiting for a long time. Newsrooms are vicious, brutal, cutthroat places to work. But if you can find at least one manager, who recognizes your talent AND is willing to nurture it, jump at the chance to work for him.

Ten years after that interview, I found myself on a panel with the aforementioned news director. We were giving advice to college journalism majors on how to succeed on interviews and land that first on-air job.

I didn’t name him–BUT with him sitting beside me– I told the highlights of the story I just told you. I said, “Things all work out the way they’re supposed to. That would have been a very bad fit—working for someone, who didn’t value my talents.”

And to be fair to him—he followed up my comments by saying, “Sometimes –as a news director—you make mistakes. I know that I misjudged one woman in particular and she went on to do very well for herself. She even won a National Edward R. Murrow for Best Feature.” (Yes, I did!)

No one else in the room made the connection. But I did. And I have to say that it put things into perspective. And I ended with this advice:

“Find the job that is a good fit for you and your skills. Don’t try to be whatever the job calls for or what you think they are looking for. Be yourself. Show them who you are – as a person and a journalist—and let the chips fall where they may. Those who value you and your work will hire you. Those who don’t—usually won’t. And you’ll find in time that the ones who didn’t hire you actually did you a favor.”